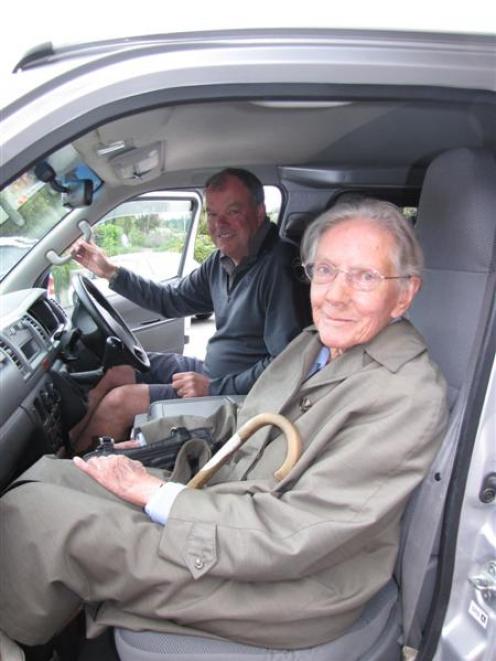 Central Art Gallery represented Margaret (who painted under her maiden name Rhodes ) for over 30 years. Margaret was one of the most popular watercolour Artists in New Zealand. Sadly Margaret died several years ago but I found a wonderful article about her. Such an amazing kind and generous woman.
Very few pieces of Margarets paintings come onto the secondary market and I am always thrilled to get my hands on them when they do.
Margaret is most certainly one of my favourites.
Frankton woman Margaret Forbes boards the Wanaka Connexions bus service. The company's drivers, including John Oliver (pictured), deliver Mrs Forbes to and from her doorstep. Photo by Lucy Ibbotson.
Frankton woman Margaret Forbes is 91 and a creature of habit. Almost every morning, seven days a week, she boards a bus at her front door and travels to Wanaka via Cromwell for a cup of tea and a chocolate brownie at the same cafe, before catching the bus back to Frankton over the Crown Range.

The 182km-round trip, which she has been doing for at least four years, is more convenient than calling in to a cafe closer to home, Mrs Forbes says.

''The bus collects me at my home and the bus to Queenstown doesn't. I'd have to go to Remarkables Park to get a bus to Queenstown,'' she told the Otago Daily Times over her regular cuppa at Relishes Cafe in Wanaka's lakefront business precinct yesterday.

Beating the boredom of living alone is another reason for her daily five-hour jaunt to Wanaka.

''I get terribly sick of just being at home.''

Relative Ann Rhodes, who lives in Greytown in the Wairarapa but regularly visits Mrs Forbes, agreed the bus trips were a wonderful way of filling in the day.

''Margaret gets bored to tears if she can't go to Wanaka, so there are two days of the year that she really doesn't like which are Christmas and Easter [when the buses are not running].''

Caregiver Janet Thomas said Mrs Forbes appreciated routine at home too, having exactly the same thing for breakfast (a slice and a-half of toast and some fresh fruit), and dinner (tinned corned beef, half a potato, some pumpkin and beans) every day.

As one of Wanaka Connexions' best customers, Mrs Forbes is well looked after by the drivers on the bus run. While the company does not usually do residential pick-ups in Queenstown, an exception is made for Mrs Forbes, who is collected from and returned to her doorstep.

In the past, she had interspersed her Wanaka visits with day trips to Invercargill several times a week, until the company's Southland service ceased about a year and a-half ago, Mr Quayle said. Only if she was feeling unwell did she not make the daily trip to Wanaka, and she still phoned the company nearly every morning to remind its drivers to collect her.

Mrs Forbes, who has no children, was formerly an accomplished artist, painting watercolours under her maiden name Margaret Rhodes. However, she gave it up so as to not let her standards slip.

''I didn't want to lose my ability like so many others do.''

She has no intention of giving up her Wanaka lunch outings, though.

''I love going on these drives

Margaret Rhodes-On the way to Glenorchy