Raised in Palmerston North, Garrick Tremain is widely known as both a political cartoonist and a watercolour painter.  Having always yearned to be a country kid he left school in 1957 to work on farms and sheep stations.  It was in woolsheds and smoko rooms that his drawing ability first raised eyebrows.  To test this suspected talent he sought city work as a commercial artist.  For 10 years he worked as an advertising designer and artist here, in Asia and in Europe.

After some years of extensive travel Garrick returned to New Zealand with a plan to establish himself as a landscape painter in the Wakatipu basin where he has resided since 1971. He has exhibited widely in New Zealand, Australia and in the USA. In 1988, eager to try himself also as a political commentator, he began offering a daily cartoon to the Otago Daily Times. His cartoons were soon appearing daily in newspapers throughout the country.

Garrick still divides his time between painting and cartooning.  He has published 16 volumes of his editorial cartoons.  He has also written and illustrated best-selling books of humorous, risqué, nursery rhymes and an entertaining work explaining his troubles with golf.

Garrick Tremain marks 30 years of cartooning for the Otago Daily Times today.  He describes how the job began. 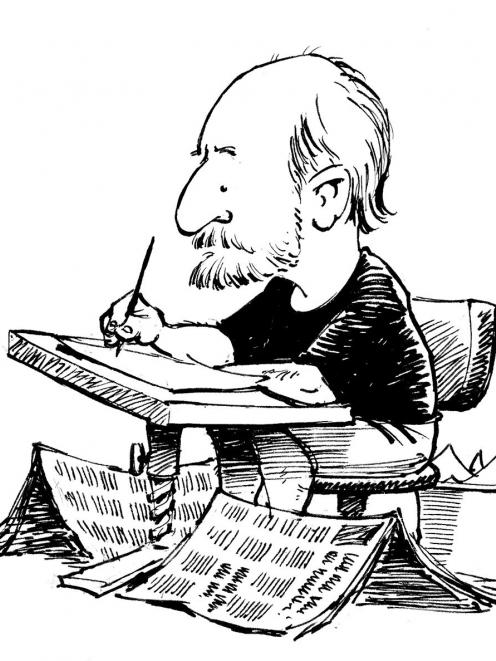 Garrick Tremain’s 2010 caricature of himself.
In 1988, in a  chance encounter in an Arrowtown pub, I first heard of the fax machine:  an amazing gizmo into which one could feed a black-and-white drawing, dial some numbers, and send the image down phone lines to another fax machine. The quality delivered was sufficient to go into a newspaper, I was told. It was a "Eureka!" moment for me.

I had long harboured an inkling to try cartooning. I had long envied cartoonists their talent to amuse and their opportunity to express their opinions and prejudices to a wide audience.

So with a few cartoon drawings and a soul full of optimism I ventured to Dunedin to raise the prospect of me, with a fax machine, becoming the cartoonist for the ODT.  I was as surprised by the negative reaction as they were by my suggestion of payment for anything published.

Not totally rebuffed, I persevered for some weeks, until it was agreed I supply the odd cartoon on a trial basis, with no promise that anything would be published.  That evening I faxed my first effort.  The next day it was in the paper. And so the next one was transmitted and that, too, was published; a pattern that has continued for 30 years.

Garrick Tremain is highly regarded as both a painter and New Zealand's funniest and most perceptive political cartoonist.